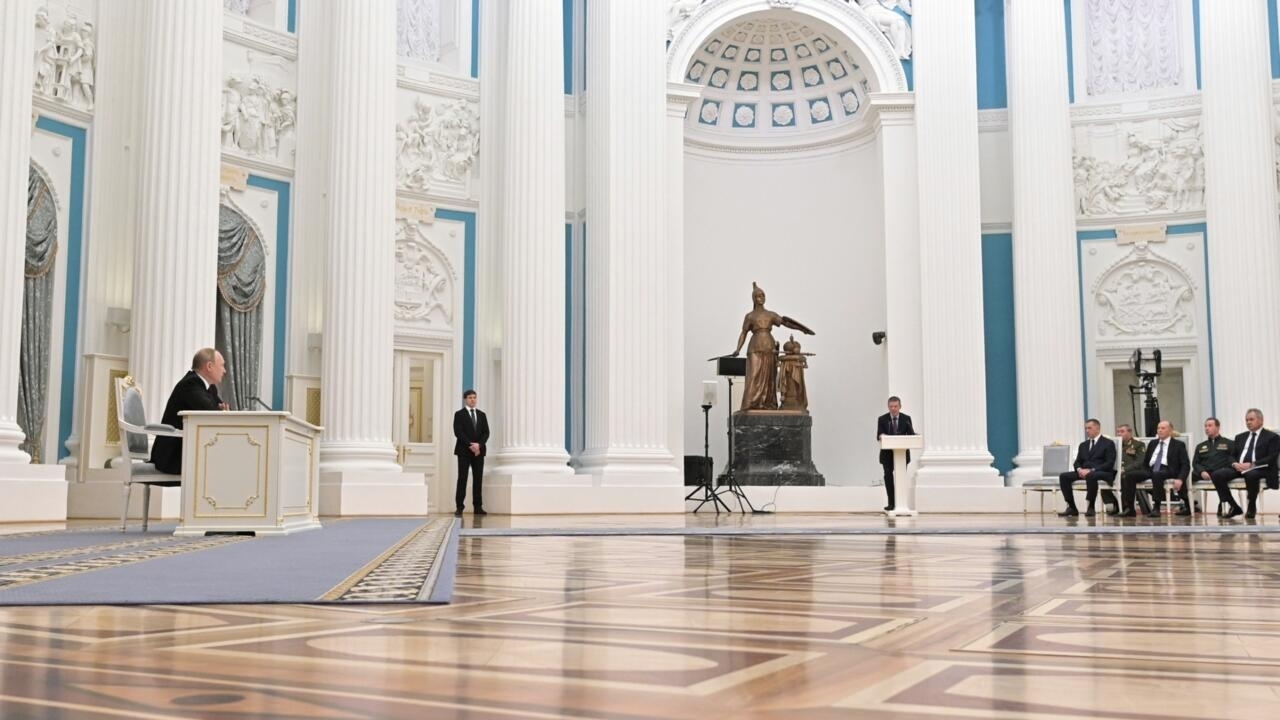 Paris (AFP)- President Vladimir Putin’s conduct in the Ukraine crisis has opened a window to the world of a leader who seems increasingly paranoid and politically isolated, according to Western officials and analysts.

Some Western leaders, including French President Emmanuel Macron, have in the past sought to treat Putin as a credible, if tough, negotiating partner.

But all notions of reliability were shattered after Putin on Monday recognized two Ukrainian breakaway regions and delivered a heartbreaking speech doubting Ukraine’s right to statehood – apparently just hours after pledging to pursue diplomacy during telephone discussions with Macron, according to the French presidency.

A French presidential official, who asked not to be named, said Putin’s speech on Ukraine mixed “rigid and paranoid ideas” that echoed the impression Macron got during his five-hour talks in behind closed doors with Putin in the Kremlin earlier this month.

“The Putin he (Macron) met in the Kremlin was not the same one he saw in December 2019,” the official said.

“What he found in the Kremlin was a more rigid and isolated Putin.”

Macron last met Putin at a Paris summit on Ukraine in December 2019.

Earlier that year he also hosted Putin for talks at his Mediterranean summer residence to launch a policy of engagement with Russia, where the smiling Russian leader arrived gallantly carrying a bouquet of flowers for the wife of French President Brigitte.

But those images were a far cry from Putin’s chilling speech on Monday, in which he baselessly accused Ukraine of seeking nuclear weapons and warned that the “Kyiv regime” was responsible for any further bloodshed.

“There was an extremely violent, somewhat delusional and paranoid analysis (…) with many historical lies,” said French Europe Minister Clément Beaune.

In unqualified comments reported by the Press Association, British Defense Secretary Ben Wallace said Putin had become “full tonto” and was a man “without friends, without alliances”.

When Putin took Crimea from Ukraine in 2014, much to the shock of Western leaders, former German Chancellor Angela Merkel was quoted by US media as telling US President Barack Obama that Putin was living in “another world “.

Now, as Western powers continue to guess what Putin’s final plan for Ukraine is – which US intelligence says could even involve an attempt to take over the capital Kiev – the scrutiny of the conduct of Putin intensified.

Officials sat in stiff chairs a tennis court away from Putin, who watched them from behind a desk as they gave their assent to recognition of breakaway regions.

In a bizarre moment that has yet to be properly explained, Putin humiliated the powerful head of the SVR’s foreign intelligence service, Sergei Naryshkin, as he stumbled in his comments.

“Speak clearly! Sergei! Yes or no?” Putin spat, drumming his hands impatiently on the table.

Naryshkin appeared defeated and then falsely declared that both regions should be part of Russia, an idea that was not on Putin’s radar.

“We don’t talk about this or discuss this!” Putin laughed scornfully. “We are discussing the recognition or not of independence!”

In another shocking detail, bloggers noticed that the watches of Defense Minister Sergei Shoigu and Foreign Minister Sergei Lavrov displayed a different time from the actual time during the so-called live TV relay.

“Naked propaganda is no longer enough for old thugs and thieves. They want blood,” commented opposition figure Alexei Navalny, currently imprisoned in a prison camp, calling Putin “the head of the political bureau (of the Soviet era) of the 21st century.”

In any case, Naryshkin’s proof remained in the final cut.

French writer Michel Eltchaninoff, author of the book “In the Head of Vladimir Putin”, said that while Putin had expressed such ideas before, there had been disturbing changes in the style of presentation.

“This somewhat sadistic, humiliating staging had an astonishing effect”, Putin being determined to “show that he decides alone” in what appeared almost as a reference to the representation of power “in the Stalinist era “.

“There is a kind of detachment from reality on Putin’s part in the name of his ideology which can be described as paranoid,” he told AFP.

“We have always said that he was a pragmatic leader, a good tactician. Will he sacrifice his pragmatism in the name of his ideology? It’s possible. In any case, he seems ready to go to war,” said he declared.

“Today is the day that Vladimir Putin crossed over to the dark side of history,” she wrote on her Telegram channel. “This is the beginning of the end of his regime, which can now only rely on bayonets.”

Marvel’s Netflix shows will reappear on Disney+, but only in Canada