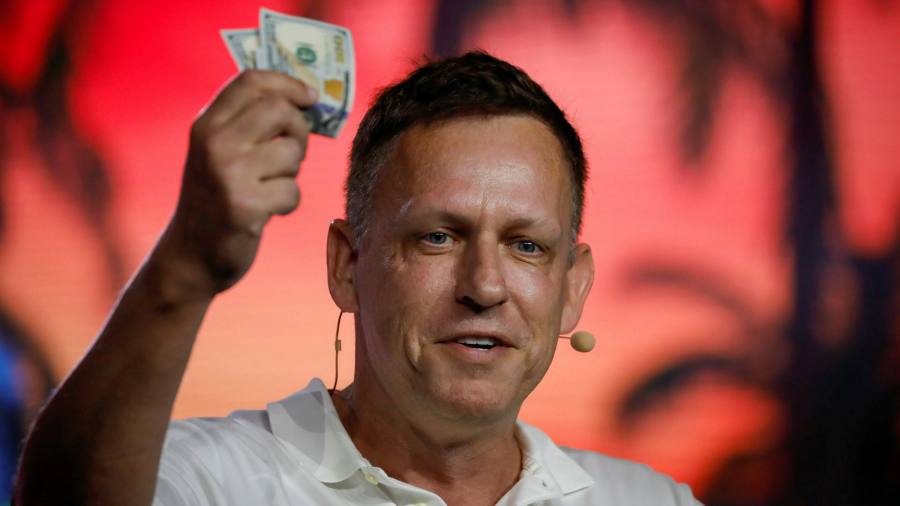 Peter Thiel mounts his tirade against the haters of crypto

Silicon Valley tech titans Peter Thiel and Elon Musk known for their controversial yet influential commentaries are aiming for maximum impact this month.

Thiel, PayPal’s co-founder and libertarian tech investor, was talking about a revolution, at the Bitcoin 2022 conference in Miami on Thursday.

In front of a jubilant crowd, he called revered investor Warren Buffett “the sociopathic grandfather of Omaha,” reports Richard Waters. He also chose JPMorgan Chase chief executive Jamie Dimon and BlackRock chief Larry Fink as part of a “financial gerontocracy” that sought to keep cryptocurrencies out of the mainstream.

Bitcoin was part of a “revolutionary youth movement” that aimed to overturn mainstream finance, threatening establishment power and wealth, he said.

The crypto has certainly divided opinion as the financial world and regulators try to rein in its rapid adoption. It is also causing a stir in the tech world as it forms the basis of the Web3 movement, where a blockchain-based technology platform is seen as the basis for a new class of applications.

Idealism about user empowerment is likely to fade if there are no tangible results, other than the possibility of rampant financial speculation and the creation of memes that will enrich a minority.

Elon Musk is also a cryptocurrency enthusiast, but it’s his social media presence and plans for Twitter that are currently of concern, especially to the company’s own employees. Following internal rumors that he will become its largest shareholder and board member this week, Twitter plans to host Musk for an “ask me anything” session with employees, reports the Washington Post.

In recent days, anxious workers have expressed concern that Musk could damage company culture and make it harder for people to do their jobs.

In the opinion of the FT editorial board, the fact that one of the loudest and most controversial voices in the “public square” of Twitter is now able to help control it should be of equal concern to the Securities and Exchange Commission, and more widely.

The Internet of (five) things

1. Microsoft thwarts Russian cyberattacks
Microsoft said it uncovered attempts by a Russian state-backed hacking group to hack into US and European government institutions to conduct cyber espionage in support of Russia’s ground invasion of Ukraine. In a blog postMicrosoft said it thwarted cyberattacks, which it attributed to Strontium, a group linked to Russian military intelligence.

2. Buyers stalk TalkTalk
TalkTalk has asked investment bank Lazard to review its options after several groups, including Vodafone, approached the British broadband company about potential deals, according to people briefed on the matter.

#techFT brings you news, commentary and analysis on the big companies, technologies and issues shaping this industry’s fastest movement from specialists based around the world. Click here to get #techFT in your inbox.

3. Toshiba is considering takeover bids
The Japanese company will set up a special committee to evaluate potential offers from private equity and other investors, opening the door to a historic deal to privatize one of the country’s biggest industrial names.

4. Discovery gives impetus to push for ‘new physics’
Scientific research to explain the structure of the universe was given a new impetus by the discovery that the subatomic W boson particle is heavier than existing theory allows. Science Editor Clive Cookson explains.

5. Twitter’s edit button won’t rewrite your life
Usually editing is a good idea, writes Emma Jacobs. However, the virtue of Twitter is that it is a fast-paced discussion forum. Introducing changes, as Elon Musk suggests, would only make this a cumbersome affair, she says.

ROLI appears to be a phoenix that can rise from the flames, the musical instrument reinventor releasing the Seaboard RISE 2 keyboard (pictured here with musician will.i.am), following its reorganization after collapsing in administration Last year.

As the number suggests, it’s a revamped version of its 2015 keyboard, which the company says “reinvented the piano as a keyboard-like, touch-responsive silicone surface. It enabled digital musicians – for the first time – to express themselves with natural gestures previously reserved for acoustic instruments”.

Improvements include a new, more precise and intuitive Keywave2 playing surface, a more powerful software suite, and a more durable platinum blue aluminum chassis. Engadget has an opinion and the keyboard will be available later this year in limited quantities, with pre-orders on their website now for $1,399 (£1,099, €1,299).

Newsletters recommended for you

#fintechFT – Breaking news on the most pressing issues in the tech industry. Register here

A Day in the Life with Director of Organizational Development, Kelly Dougherty