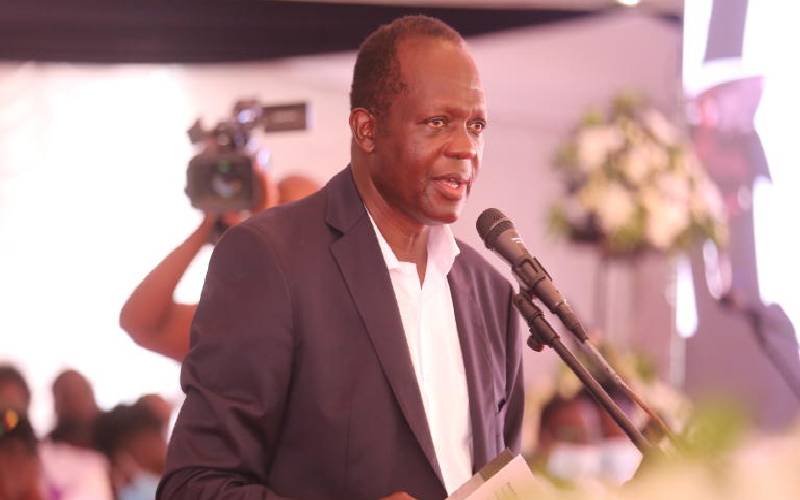 Speaking during an interview with Inooro FM on Friday, Tuju said that if passed, the bill would allow massive vote rigging and reverse the gains made by the 2010 Constitution in electoral reforms.

Tuju said the bill was sponsored by the Independent Electoral and Boundaries Commission (IEBC) and not Jubilee as stated.

This bill is brought forward by IEBC, not Jubilee. We cannot accept any law that allows elections to be rigged in this country. We will not support any bill that negates the constitution and the gains that have been made,” he said.

The bill pushes for alternative methods the IEBC can deploy to relay results in the August 9 election.

It also aims to allow the manual identification of voters at the polling station.

Jubilee was the recipient after the bill was introduced on the House floor on Wednesday by Majority Leader Amos Kimunya.

“Section 21 seeks to amend Section 44A of the Act to provide an additional mechanism for identifying voters and reporting election results,” the bill states.

Part of the implication of the provision is that returning officers who operate polling stations would have to physically deliver election results to the national counting center.

This further implies that the failure of the electronic transmission cannot be a basis for contesting the result of the presidential election.

He said the country has invested a lot in the electronic system, hence the need to deploy and improve the use of technology and not go back to manual.

“We do not support the Elections Amendment Bill which takes us back to a manual counting system open to manipulation and error,” he said.

United Democratic Alliance (UDA) digital strategist Dennis Itumbi has expressed his dissatisfaction with the bill, saying his political team will have more than 55,000 accounts to announce the results of the August 9 poll. , alongside the electoral body IEBC.

Most Kenyans have expressed fears of possible election interference which could lead to chaos similar to the 2007 post-election violence.

Some have discouraged the use of manual transmission of voting results, saying it will heavily spread Covid-19 disease.

“….I am at Azimio but I cannot tolerate legislation intended to erode our technological advances on the transmission of poll results. All we need is to improve the system to prevent technological rigging. Let’s not bring Kenya to a Kivuitu moment,” Makori Abuga wrote on the microblogging site.

Electronic transmission of results was at the heart of the 2017 presidential petition where opposition leader Raila Odinga successfully challenged President Uhuru Kenyatta’s re-election to the Supreme Court.

The country was plunged into a crisis in 2007 after the delay of some presidential results attributed to the manual transmission. Some election officials took too long to report to the national counting center.