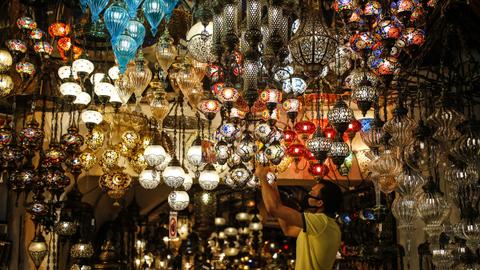 In 2021, Turkey’s textile industry reached a record high: $12.9 billion in exports, with more than 200 countries and regions around the world covered.

Ahmet Oksuz, head of the Istanbul Textile and Commodity Exporters Association, recently said exports are expected to rise to $15 billion in 2022.

Speaking to the media about the achievements of Turkish producers and entrepreneurs, he pointed out that exports to the United States alone have grown steadily over the past three years and by the end of this year will have reached over a billion dollars.

The United States is one of the world’s leading producers and exporters of textile raw materials, fabrics, yarns, garments, household items, and other textile products. Therefore, mastering the competitive US market is considered a great achievement for Turkish companies. According to influential market research by Statista, as early as 2020, amid the pandemic, Turkey overtook the United States in global apparel exports.

More than 40,000 companies and around 4 million people employed in the textile industry have contributed to this breakthrough.

What has been the road to success for Turkish light industry?

From the Ottomans to the Republic

The development of Turkish light industry started during the Ottoman Empire. Exquisite handmade oriental rugs have always been in high demand all over the world.

In the mid-19th century, the demand for middle-class Turkish rugs in Europe and the United States spurred the development of artisan workshops where machine spinning was used. This innovation led to a jump in productivity, a decrease in production costs and an increase in the competitiveness of Turkish products on the world market.

Besides traditional rugs, industrial production covered woolen and cotton products, dyes and finished fabrics, and then garments. By 1870, factories in Ottoman Turkey had produced over a million yards of woolen fabrics and garments made from them.

World War I and the weakening and disintegration of the Ottoman Empire caused great damage to the Turkish economy and light industry. After Turkey’s War of Independence, textiles became the main import product for Turkey under the Lausanne Agreement (1923), which prohibited the imposition of duties on imported goods.

However, the Great Depression of 1929-1939 ended the dependence on raw materials and the policy of “goods for raw materials”. The Turkish government, relying on its own budget and loans, embarked on a plan to develop its own light industry based on industrial crops, especially cotton.

In 1933, the government organized the Symerbank, which lent for the construction of state-owned spinning and weaving mills. This contributed to a 60% increase in light industrial production. During the following decades (1940-50), the Turkish government stimulated the development of the entire private sector by increasing import duties on light industrial products, offering a credit program for entrepreneurs and introducing other measures.

Benefiting from loans from the World Bank for Reconstruction and Development and the IMF, Ankara in 1979 set out to create its own clothing brands and move light manufacturing factories to the south-east of the country with a labor force. less expensive. As a result, exports of Turkish-made garments abroad have increased dramatically. In 1995, it accounted for about a third (29%) of the country’s total exports.

In the 1990s, Turkey accounted for 3-4% of the entire global clothing market. It has become one of the six largest apparel exporters in the world and ranked among the top ten global textile leaders in terms of yarn and textile production.

Today, Turkey is one of the leading countries with a developed textile industry. Ranked 1st in Europe in terms of cotton production, Turkey’s light industry has no problem with raw materials, making the country one of the leaders in textile production.

Major EU brands, in an attempt to consciously refuse to do business with China, have started placing more orders with Turkish companies. This desire has been particularly exacerbated by the problems associated with Xinjiang and the cultivation of cotton by forced labor.

Moreover, due to the coronavirus pandemic, European companies prefer geographically close Turkey with its own cotton production. As a result, Europe is now the main export market for the Turkish textile industry (50%) and three countries – Germany, Great Britain and Spain – are the main consumers of its products. .

In terms of quality, Turkish fabrics are as good as Italian and German ones. However, Turkish products are cheaper than European products. This is due not only to the fact that the country does not depend on imported raw materials but also to the presence of holding companies, bringing together many Turkish industrialists. For example, the famous Turkish clothing brand Colin’s is part of Eroglu Holding, which, in addition to textiles, is active in real estate and retail.

Another success story of the brand, the acquisition of the French brand LC Waikiki by the Taha group. Having become a Turkish brand, LC Waikiki has found new life. With markets in 38 countries, the company whose motto is “Everyone has the right to dress well” offers its customers inexpensive but high-quality clothing.

However, not all Turkish products are represented by budgetary goods. Many companies have moved to a more expensive price segment. For example, Mavi entered the list of the world’s leading high-end denim clothing brands. Its target audience is young people who prefer luxury clothing.

Another vanguard of Turkish light industry is carpet weaving. It is one of the first traditional arts of Türkiye, and for centuries the country has produced a large number of carpets for the world. Famous examples of Turkish weaving date back to the period of the Seljuk warrior dynasty, but it reached its peak during the Ottoman period.

The incredible popularity of carpets from the Ottoman state was even represented by Renaissance artists: in the works of Hans Holbein the Younger, Lorenzo Lotto and other famous artists.

During the Ottoman reigns, the workshops of Ushak, where the delicious carpets of the Turkish court nobility were woven, were famous throughout the world. Among the antique examples are often Ushak rugs with side lines densely filled with elegant arabesque images.

Today, 99% of all carpets in Türkiye are handmade, mostly by women in their homes or factories. The country’s revenue from carpet exports in 2021 was $3.45 billion. Turkey ranks first in the world in carpet exports.

The textile and clothing industry with the label “Made in Turkiye” is able to compete in international markets and is likely to reach new heights in the future.

OPPO will launch its flagship Find X5 series on February 24, 2022