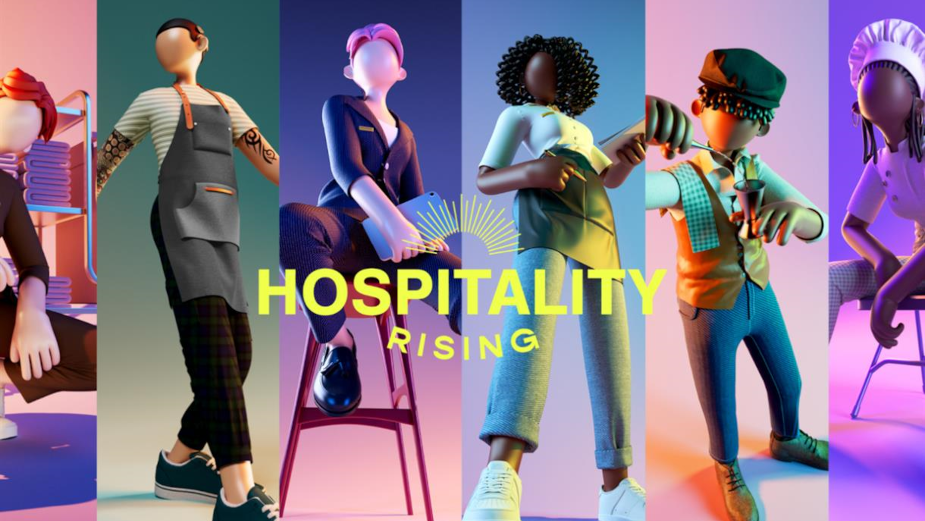 The “Rise Fast, Work Young” campaign is a response to the hospitality sector which is experiencing a chronic shortage of labor and skills. The brightest and best in the advertising industry have come together to create the UK’s biggest advertising recruitment campaign and save the country’s hotels, pubs, bars and restaurants. Together with Hospitality Rising, the crack team, assembled by Julian Douglas as part of his IPA Presidential 10X THINK program, with the ambition of doubling the number of people considering employment in the sector. Paulo Areas, CCO at Forever Beta, the campaign’s lead creative agency, takes us behind the work.

Q> Why was this particular issue such an exciting project for Forever Beta?

Paulo > The hospitality sector is experiencing a chronic shortage of labor and skills with more than 400,000 vacancies in hospitality and only one in five UK workers (21%) believe it is an industry attractive to work. It was clear that we would need more than a recruitment campaign, but somehow to change the face of hospitality in the UK. To do this, the IPA brought together some of the best creative minds and agencies in the country to tackle the problem, and of those agencies, Forever beta was tasked with providing the creative work that would drive this change. Passionate about solving problems like we are, this one was especially exciting because the core of our independent mindset is understanding the constant change in culture and being able to stay relevant by influencing or impacting the behavior of society. What we did was create not just a campaign, but a tone of voice, visual language and attitude that aims to reshape the hospitality industry and connect with young audiences, making them proud to be part of something. something as exciting as this sector. .

Q> Where does the inspiration for creation come from?

Paulo> Hospitality is an exciting and unpredictable career. It offers flexibility, freedom and rapid career progression, but most importantly, it’s not boring like sitting at a desk from 9am to 5pm, and according to research and strategy work we’ve done with VCCP and Ogilvy UK, it was the most attractive argument for enrolling young people. The first creative task was therefore to find a line that would embody this spirit. ‘Get up quickly. Work young. was born from the energy and attitude of the iconic phrase “Live fast die young”, but brought to life with a more constructive and relevant meaning, and is the cornerstone of the entire campaign, dictating the tone of voice. Finding the visual language was as important as finding the line, as we clearly understood from the start that this should not look like a typical recruiting campaign, but rather covers and posters that would be embraced by the young community. The faceless characters that deliver the message are a subliminal invitation to change the face of the industry, and the colors, type, lines and everything that followed were well thought out to deliver a code that would transcend a media plan of campaign and would become part of how the hospitality industry presents itself.

Q> What were the challenges you faced?

Paulo> The campaign relied heavily on the involvement of investors and partners and aimed at such a young audience, it was not always easy to convince business owners that this was the right approach. Mark McCulloch, Founder of Hospitality Rising, has been instrumental in selling what we were trying to achieve to all investors and getting them on board, and now, just weeks after the concept’s soft launch, we’re bringing together even more of partners who have begun to realize the impact that this new language can bring to young people and to the sector.

Q> What was it like working collectively with other agencies on this project?

Paulo> Fluid and constructive. With Julian Douglas, President of the IPA as conductor, we were able to work together, each adding their grain of sand towards a common goal. I also think it happened because the whole process transcended the corporate level and involved individuals with their own personal passions and beliefs. All willing to make a selfless contribution to solving a national problem. Some of these people became my personal friends as the campaign evolved, and that made all the difference.

Q> How do you think this campaign will change things for the hotel industry?

Paulo> At the beginning of the whole process, I remember someone saying that the ultimate victory would be for the people who work in the hospitality industry to proudly brag about it. When you look at the tone of voice we bring to the table (never said better) it’s all about praising the attitude and excitement of a colorful life where you engage with different people every day and live life like a job. No other industry can talk like that. We seek to establish a code that will set hospitality apart from other sectors and make it exciting, exciting and fresh, not just in this campaign but in everything the sector does from now on.

Q> Is there any behind the scenes information you can tell us?

Paulo> Most of the people involved in the campaign were actually from the target audience we were trying to reach. From the voice behind the hospitality track to the animators and motion graphics, everyone had experience with hospitality and could relate to the tone we were looking for, bringing their own unique vision to the campaign. The process included people not only from the UK, but also from Vietnam (Mono Station), Brazil (Ritmika audio arts) and more. It was truly a huge effort of people embracing the same cause, and that’s what we’re most proud of.

When is Children in Need 2022? Pudsey Day date, channel and celebrity lineup for 2022