Developing Asia can do without Western “influencers”

GEORGE TOWN, Malaysia – When I started traveling overland through developing Asia almost 15 years ago, the paper guides were my Google, and my cell phone – lacking a mobile data connection fast – was very useful as a pocket alarm clock. If I wanted to send a photo home, I would have to find an internet cafe, connect my digital camera, and risk having its memory erased by a hidden virus. Most importantly, before visiting a country, I would try to familiarize myself with local customs and cultural and religious sensitivities.

It seems to be the exception rather than the norm in the digital age. Since traveling became a hobby, there have always been “ugly tourists”. This is especially true in developing Asia, where Western travelers have come under scrutiny for cultural insensitivity and bad behavior since the infamous Hippie Trail commuted between London and India in the 1970s. But decades later, we have seen the emergence of a generation of more bombastic, self-promoting Western “influencers” – Internet content creators with few editorial filters between their snap judgments and screens of social media consumers around the world.

These influencers, some of whom have many followers on social media platforms, have rocked the travel industry with new ways to brand destinations through social media, blogging, and nomadic smart work. Before COVID-19 crippled the travel industry, many of these self-proclaimed “digital nomads” were clustered in tropical cities and more affordable islands in developing Asia such as Bali, Chiang Mai, Bangkok, Koh Phangan and Penang, turning them into thriving hotspots.

The majority of these traveling influencers are young Western millennials, some of them who see the cultural differences in the countries they visit as fodder for self-promotion posts and cheeky videos. In recent years, these influencers have been both a boon and a bane for Asia. They may not always understand the deep cultural nuances of the places they visit – sometimes only briefly – but they can reach a global spendthrift audience through their large social media followers, which local tourism authorities often like.

For example, Pakistan, which remained open to international tourism during the pandemic, adopted Western influencers in a bid to clean up the country’s poor security reputation and revive its travel campaign. The 2019 Pakistan Tourism Summit in Islamabad focused on interviews with six Western travel bloggers who were asked to explain that negative stereotypes did not match their travel experiences in the Islamic country. This reliance on predominantly white Anglo-American “travel ambassadors” has prompted some complaints from the Pakistani tourism community about the complete lack of local voices.

Such problems resurfaced in June when one of the six influencers, Canadian vlogger Rosie Gabrielle, who then converted to Islam and married a Pakistani, urged domestic tourists on her social media to “stop to destroy your country “. She blamed them for “bringing bad behavior, drugs, vulgarity, rave parties and… a lot of trash” to parts of northern Pakistan, including the famous Hunza Valley.

Few have dared to push the well-known influencer away, but Lahore-born actress Ushna Shah has finally spoken up, saying her country does not appreciate the “critical and condescending white aspiring saviors” who want to make it right. . Shah added sardonically that when she went to Hunza, she “forgot to take a picture of me picking up litter. I forgot to show poverty to get more likes and followers.” 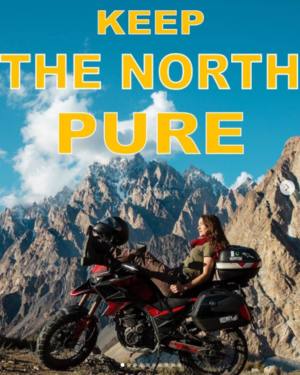 Shah’s response was unusual for Pakistan where, as a local friend told me, “there is always a colonial mindset, and white people rule our minds.” But it was also a timely response to the controversial judgments foreign influencers sometimes make to get more social media “likes” and website views – and often, ad revenue and sales commissions. of products.

The desperate need to make money in these tough times may also have prompted foreign influencers to mock local customs and laws in some popular regional destinations that were open enough (or desperate) enough to accept them in the midst of the storms. global travel restrictions.

Bali has been a magnet for such toxic behavior since 2019, when Czech influencer Sabina Dolezalova uploaded a video of a man splashing sacred water from the Ubud Monkey Forest on his bare back. . Largely empty of the 6.3 million foreigners who visited in 2019, the island continued to host digital nomads traveling on business visas throughout 2020. But bad apples ruined the relationship between them. visitors and impoverished locals, forcing authorities to show that Bali would no longer be a playground for obnoxious foreign tourists.

In December 2020, Russian instagramer Sergey Kosenko gained notoriety by filming himself throwing himself from a dock on a motorcycle and diving into the ocean. He was kicked out in January after posting photos of himself partying without a mask – a violation of local COVID-19 health protocols. That same month, Bali-based American expat Kristen Gray was kicked out amid an outcry over her tweets promoting Bali as a cheap and LGBTQ-friendly destination for foreigners, and for suggesting that ‘they could bypass restrictions on coronaviruses. Indonesian authorities later accused her of disseminating information that could “destabilize” the public.

Despite the region’s reliance on foreign tourist dollars, these episodes showed Indonesia flexing its muscles. After years of accepting tourist misbehavior for money, Southeast Asia’s future may no longer be that of a cheap vacation destination where foreign visitors and influencers can get away with almost anything.

The burning question is how long will the new approach last? As travel restrictions begin to ease despite a worrying increase in COVID-19 infections, the Thai resort island of Phuket opened a quarantine-free travel program in early July, attracting affluent, fully vaccinated foreign tourists. After just a few days, a German national married to a Thai man broke the rules by spending the night with his family instead of sleeping in his designated hotel, as the regulations require.

Tourist-starved Bali, which has repeatedly postponed its scheduled reopening to visitors, will be seriously affected by an Indonesian “no vaccination, no theft” policy introduced on July 4, which bars unvaccinated foreign nationals from entering the country. Indonesia. The new rule prevents the return of most of the large number of Australians who flocked to Kuta’s beer bars, and at the time of writing, were largely unvaccinated, creating potential financial pressure for an easing of prices. rules in order to bring back tourists.

This conflict of interest illustrates a larger problem. If developing Asia is to encourage more respectful travelers, then ill-informed foreign influencers and anti-social tourists will need to be kept out or forced to change their behavior. Such an approach should be sustained over time rather than hastily implemented like a flash in the pan of a pandemic.

Marco Ferrarese is an Asian writer and author of books based in Penang.