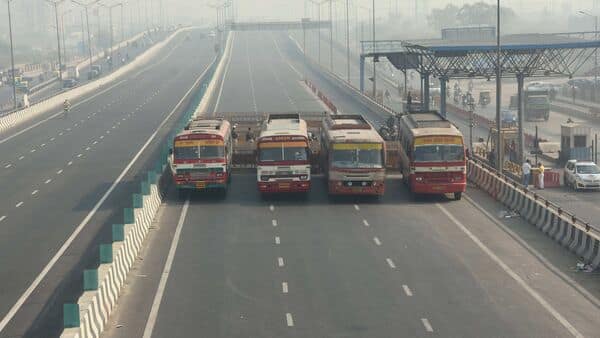 NEW DELHI : Delhi’s Transport Minister Kailash Gahlot took to the microblogging site Twitter on Wednesday to announce that from April 1, buses and good carriers will enjoy dedicated lanes in the nation’s capital.

This will be imposed on 15 selected routes and those who violate the strict lane discipline that the Delhi government is going to impose will have to pay a fine of up to ₹ 10,000. Errant drivers could also be served six months in prison.

The notice further mentions that the traffic police, transportation department will set aside dedicated lanes for the exclusive use of buses and cargo carriers from 8 a.m. to 10 p.m.

Other vehicles may be permitted to travel in these reserved lanes for the remainder of the time. Buses and freight vehicles will, however, remain in their dedicated lanes 24 hours a day, he said.

The official statement shared by Gahlot says vehicles found driving in other lanes will be subject to prosecution under section 192-A of the Motor Vehicles Act 1988, which carries a fine of ₹ 10,000 and a prison term of up to six months. They will also be charged under Delhi Car Parking Maintenance and Management Rules, 2019.

“To make Delhi’s roads safer, @ArvindKejriwal Govt is launching bus lane enforcement campaigns to increase safety for commuters and tackle traffic jams. Instructions have been given to DTC and cluster for sensitization of drivers, to the PWD for the assignment of bus lanes and transport, to the police teams.” Transport Minister Kailash Gahlot tweeted.

To make Delhi’s roads safer, the @ArvindKejriwal the government is launching bus lane enforcement campaigns to increase commuter safety and tackle traffic congestion. Instructions were given to the DTC and the Cluster for sensitizing drivers, to the PWD for the allocation of bus lanes and transport, to the police teams. pic.twitter.com/FttRKRy6G7

In the first phase, the enforcement campaign will be carried out on 15 of the 46 corridors selected under the initiative, he said.

The Department of Transport has issued a notice to Delhi Transport Corporation and Delhi Integrated Multi-Modal Transit System Ltd to sensitize its drivers on the matter.

The Public Works Department has been instructed to properly mark and identify hallways by placing warning signs and signs in appropriate locations.

In the event that a light motor vehicle (LCV), such as a car, is found parked or unattended in the marked bus lanes and its owner or driver refuses to clear it, the vehicle will be towed and the driver will have to bear towing costs on top of the trouble, he said.

The transportation department will deploy two shifts in two shifts to enforce lane discipline. Cranes will also be deployed to impound and remove vehicles obstructing bus lanes. Videos or photographs of the obstructing vehicles will be captured as evidence, the statement said.

* Thank you for subscribing to our newsletter.

Last war in Ukraine: US says Russian forces pushed back in some areas around Kyiv