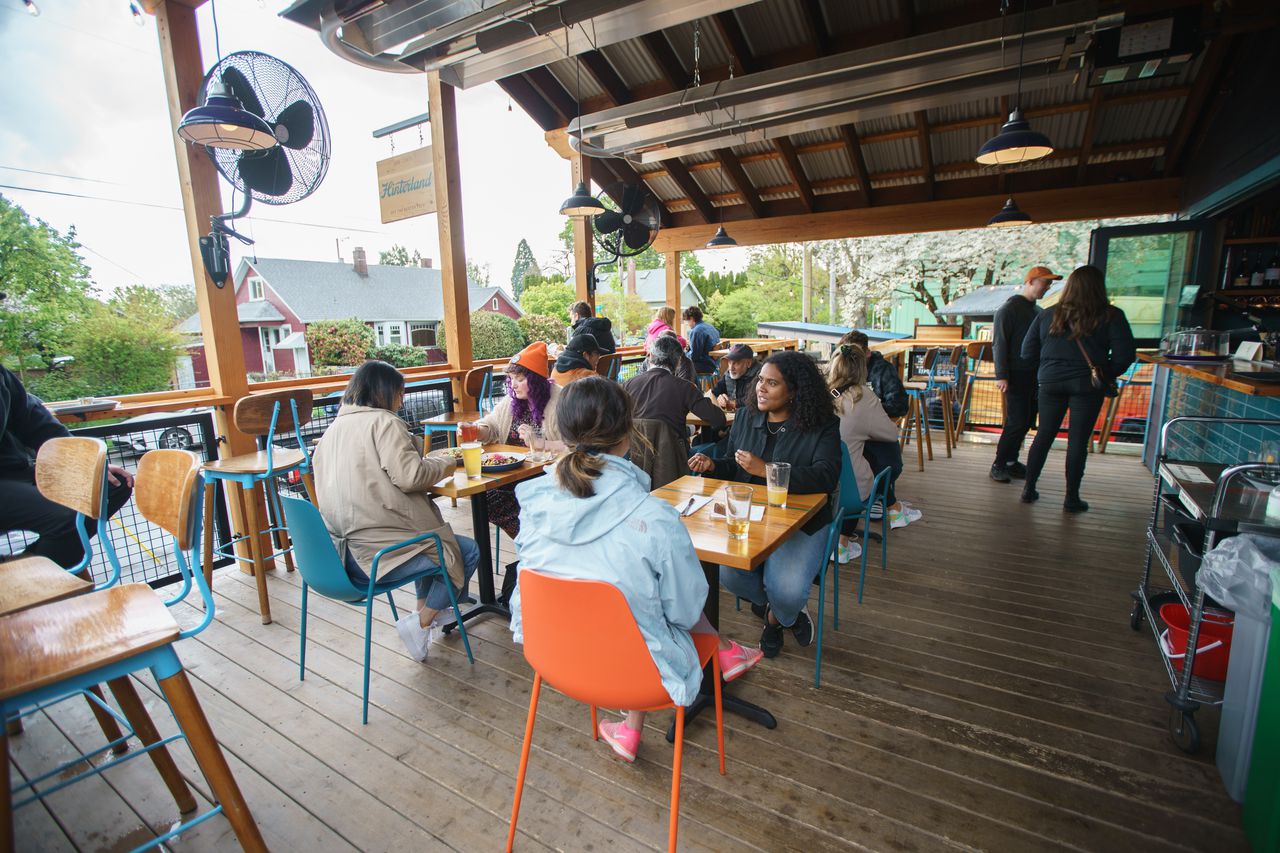 Every time a food cart pod is shut down, its parking surface gouged out, replaced with a hole in the ground, and possibly another boutique hotel, a debate erupts over the future of food carts and the pod format. -same.

After a few visits, I think Hinterland Bar & Food Carts, a new cart and cocktail bar built in a former acupuncturist’s office on the western edge of Mount Tabor, offers a possible solution.

Portland has hundreds of carts spread across dozens of pods. So why is Hinterland setting a “new standard” for pods, as Matt Vicedomini, owner of Matt’s BBQ Tacos, put it earlier this year? Here are three big reasons, roughly in order of importance to me:

The bar: There’s a reason “Bar” comes before “Carts” in the pod name. Among the first hires of owners Ryan Schenk and Rowan Dunlap? Taylor Gehrts, a bartender with experience at Trifecta and Smallwares. From the large window of the Hinterland open bar, Gehrts and his team pour a dozen taps, including a bohemian pilsner from Chuckanut, a hazy IPA from Ruse and other smart selections from some of the Northwest’s best brews. Mixed drinks are even more impressive, with two cocktails matched to the food in each of the pod’s five carts. The hinterland belongs with Takibi, Phuket Cafe and the nearby Bellwether on lists of the best new cocktail bars in town.

The carts: Much of the early backcountry reporting focused on big-name carts signing up to move the field. Indeed, three of the pod’s five food options were among our picks for the best new carts in town the year they opened, Burger Stevens (2016), Matt’s BBQ Tacos (our 2019 cart of the year), and Poppyseed ( 2021). Joined by Third Culture Kitchen and La Taquiza Vegana, the cart quintet brings more to the table than the usual assortment of carts, with Poppyseed in particular standing out for its elevated approach to food cart food. Pound for pound, Hinterland has the second best selection of carts in Portland, after Prost of North Portland! pod.

The commodities : Instead of the usual paper plates and take-out boxes (or, increasingly during the pandemic, polystyrene containers and plastic bags), food in Hinterland is delivered on metal trays or bioplastic plates. renewable, with appropriate forks and knives, all washed in-house, a feature more commonly found in a counter-service restaurant or a posh downtown food hall. There’s plenty of covered seating on the front and back patios, as well as a somewhat underutilized space inside with a TV that often plays nature shows or shows. cartoons. Head to the back to find a second large flat screen TV, where you can probably watch the Stanley Cup or NBA Finals this month, if you wish.

I’ll always be careful when choosing when to visit – on sunny days the line for drinks can be long and the competition for tables can get fierce (my favorite perch is the front patio rail overlooking 50th Ave South- is, perfect for people watching). And the focus on high-end carts means that two or even three of the five may be closed during your visit, limiting your food options. But even my little backcountry details seem to be fixed in real time – more bike parking has recently been added up front, the interior space is getting more houseplants and decorations to make it look like less like an old waiting room, while a patch of dirt in the back where kids have congregated could soon be activated with some form of playground, Schenk says.

Food carts and their pods have been declared dead countless times over the years, always prematurely. With places like Hinterland, the future seems secure. But Hinterland looks like a model that could be replicated, with an elevated cocktail bar surrounded by carefully selected carts, plenty of outdoor seating, and restaurant-grade amenities, with an emphasis on sustainability, all on a neighborhood footprint. relatively small.

Here’s what to order if you go:

Steven’s Burger: Portland’s OG burger smash superstars are back, serving delicious double cheeseburgers, skimpy fries and as compound hot dogs as I’ve tasted in years. Having tried both recently, the burger is doing well against Shake Shack, a recent addition to Beaverton, where this baby blue cart was most recently parked.

The Vegan Taquiza: Admittedly, I’m not the target audience for these plant-based tacos filled with jackfruit or soy curls, which I found a bit dry when I visited. But I have vegan friends who swear by the cart. Next time I’ll have my eye on carne asada mushroom frieswhich come with shiitake instead of steak.

Matt’s BBQ Tacos: Our 2019 Cart of the Year features Austin-style smoked meat tacos on cart-made flour tortillas. Try the delicious taco migas, best when the small pieces of tortilla chips retain their crunch, or save room for the goatwith its smoked brisket and pulled pork on a pair of cheese-stuffed tortillas, designed as an homage to Taco Bell’s Cheesy Gordita Crunch.

Poppy seed: Fine dining by Tim Willis and Lissette Morales Willis has always felt a little out of place in the former Killingsworth Station module. Here in Hinterland, the couple serve freshly shucked oysters with a perfect Pernod reseda, seared redfish escabeche with tender white beans, puff pastry with lamb and a toasted coconut cake with fresh pineapple for dessert.

Third Culture Cuisine: You can’t have enough ramen or lomo saltado in your life, but this fusion cart – which blends flavors from the chefs’ respective upbringings in Japan and Peru – has impressed the neighborhood the most with its fried chicken sandwichesserved on a brioche bun with or without homemade hot sauce.

At the bar: There is creativity in the cocktail menu, although my favorites so far are the duo designed to accompany Burger Stevens: a boozy amaretto root beer float and an “inverted Manhattan”, where vermouth is featured instead of rye. For Third Culture Kitchen’s Peruvian-Japanese fusion, Gehrts made a pisco sour subtly flavored with yuzu citrus. For La Taquiza Vegana, a horchata cocktail with a mixture of rum, fernet and spiced rice milk from the cart.

A unique rickshaw compared to Tesla cars as it operated without a driver; look