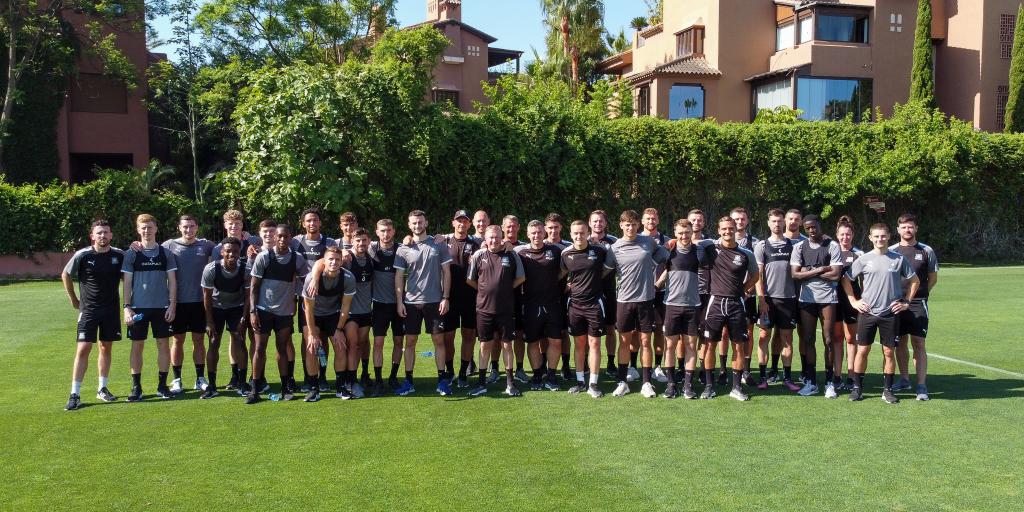 The last day and I write this from the club coach somewhere just outside Bristol, with the sunset giving off a warm and glorious glow. We are back in England, but time seems to have followed us.

Now, before I start, I know I’m a little behind with this entry but knowing my history with airports, I wanted to make sure the drama was done. Luckily, other than a slight confusion when someone removed my bag from the baggage carousel, everything went well.

So apologies aside, now on to the good stuff.

Looking back on the week, I can’t help but come to the same conclusion – what an incredible success.

Five days of hard, hard and intense work, in good weather and with great people.

This last point, about people, is perhaps the most striking. Of course, this trip was about football and fitness, but seeing these guys in downtime, talking about life or football or whatever, and getting to know them better, you realize how no they are awesome.

I’ve lost count of how many times in player interviews I’ve heard the phrase ‘we’ve got a great dressing room’ or ‘this is a great group of guys’. I always believed it, but now I’ve seen it first hand.

The last full day in Marbella started like the previous four, at breakfast for 8 and then on to the training grounds for 10. Rather than going through the intensive training of the previous days, this one was mild. A quick release in the gym before a few slow laps around the pitch.

Again, as in previous sessions, I stand courtside and chat with the gaffer. But, instead of talking about our coverage plans, we just chat. He goes golfing with Mark Hughes, Luke Jephcott and Ryan Hardie later and looks forward to the meal later in the day.

He’s relaxed, he’s happy and he’s happy that the form of the team is in the right place.

Once the session is over, we walk back to the hotel. Charlie and I are joined by Callum Burton and Mike Cooper. Again, the chat is not related to football, it’s more general, about cars, vacations, houses. I felt less of a media officer, more of a companion.

Back at the hotel we part ways, Coops is also gone to play golf while Cal is gone to relax.

Charlie and I sit down at the front desk to work out the daily content plan. But today it’s faster. Usually we spent a good 10 hours plugging in and working, but today we did it in half that time. A chance to go swimming.

After a few hours, it’s time to head to Puerto Banus for a steak dinner and a few drinks.

The food is amazing, I choose a sirloin and a baked potato, and everyone clears their plates.

The gaffer taps his glass and begins a speech: “I just want to say thank you to all of you. Your hard work this week doing everything you do for us and the club.

“It’s been hard work, hasn’t it?” But it was awesome. Have fun tonight, have a few drinks and let yourself go, you deserve it.

With that, we head back into town and see a few of the guys and spend an hour sitting with them. Again, this felt different from the times I’ve sat and chatted with them before. James Wilson comes over and puts his arms on my back.

“Have a good week Char? It was great having you guys here; I hope you were part of it.

It’s those moments, the downtime, the walks from the hotel to the training ground that make you feel like you’re part of it.

It’s a special group of players we have in Argyle, they’re united as one, all clichés, but they care about the people.

In the time it took me to write this, the sun has now set and Love Island is playing on Coach TV. It’s calm, a bus full of tired bodies, but it’s a supportive bus. Everyone inside wants the same thing – to do well for Argyle and I have full confidence that we will.

How to get the best return on investment from Facebook…